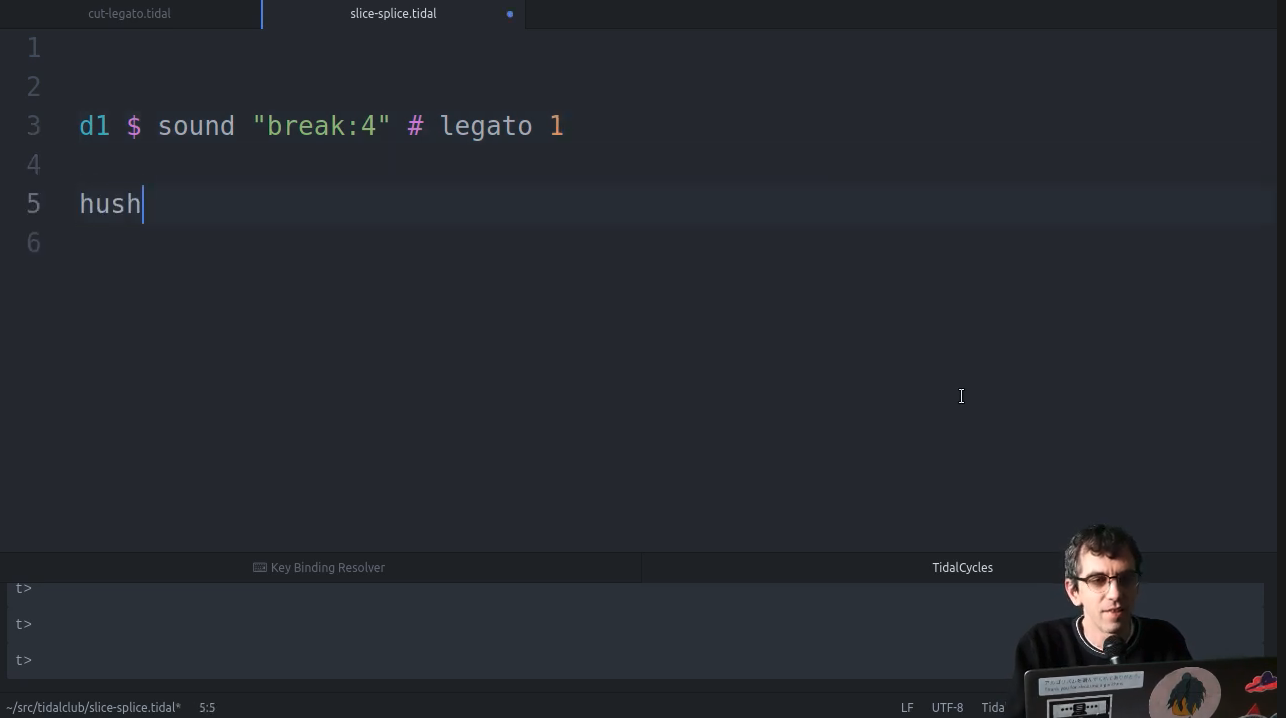 There's now an online Learning TidalCycles course, lead by Alex McLean who created Tidal. It's based on around pre-recorded videos so you can join at any time. It was originally 'pay as you feel', but is now completely open access. If you find it helpful though, you can still contribute to the TidalCycles open collective fund.

The course was organized in 8 weeks. In the next sections you will find the material for the first four weeks, and on the next part the remaining.

These are the links to the original course posts in the community forum:

They are interesting because of the questions and answers from the participants.

Aimed at people new to live coding, and goes through the basics of how to interact with Tidal - starting and stopping code and so on. Look at the video description to jump to different parts, and switch subtitles on if I'm speaking too fast.

Here's the Tidal Club sample pack. First, save and extract the samples somewhere:

Here are the steps in brief:

With all that done, you should be able to restart SuperCollider (you can do that via: Language -> Recompile class library, or just by closing and reopening SuperCollider), and have SuperDirt automatically start up inside SuperDirt, with all the new samples. I hope that's clear, but please do let me know if you get stuck!

Here's the contents of samples-extra:

Ok welcome to mini-notation week! Here's the first video and WorkSheet, exploring sequencing of sounds in Tidal's mini-notation. Copy and paste the following into atom (or whatever editor you've set up with tidal), to explore the concepts in the video.

There's a lot more to go through with the mini-notation. Have fun with it, while also exploring the sounds in the default samples and extra-samples samplepack (You'll see a list of them in the SuperCollider "post window" when you start SuperDirt). If you haven't loaded up the extra-samples yet, have a look at the previous lesson 5.

If you make something you like, be sure to save it somewhere and keep it safe! You might also like to keep several versions of a pattern, saving not only the final pattern but how you got there.. A lot of the music in live coding is in the edits, and not just the end result!

Ok lets go deeper into the mini-notation! Here's a video. I experimented with fitting more things in a 'lesson', making a longer video accordingly.. But I think I was flagging by the end! I put a clarification or two in the subtitles. I also experimented with visualisation, which turned out more helpful at some points than others..

Here's a worksheet for hands-on exploration. Be sure to edit things to test your assumptions and try to get round what's going on - and please do ask questions if anything is unclear. I've put a few tasks at the end.. Following forum discussion we're also putting together more creative tasks.

Lesson 1: starting out with effects#

Ok, time to start exploring some effects! In this video I introduce some of the many effects available with SuperDirt and begin to explain how Tidal goes about combining two or more such patterns into one. We'll return to this later..

If you find that some of the effects don't work for you, then check that you have sc3-plugins properly installed in SuperCollider.

Hi all, here's a new video, exploring ways of manipulating time. I enjoyed this one! Here's a worksheet to go with it:

Here's another video as promised. To tell the truth, I'm super tired at the moment, so despite a couple of takes the video ended up a bit "non-linear", with an explanation of the hurry function dropped in the middle of an exploration of the different ways of combining control patterns of the same type.

Here's a worksheet which should hopefully help get your head around this. Reference material with diagrams to follow soon:

Before getting on to working with longer samples, here's something about the every function. It's a nice clear example of how functions work, and gives us the opportunity to start to get a feel for how parenthesis and $ works. I also go through how to add an effect as a function.

I had a lot of problems with corrupted subtitle files which I won't go into.. and only after editing the subtitles noticed that my friend the vertical grey oblong decided to join me in the video. They're not really in the way so I decided not to reshoot it all, hope they don't get too distracting!

Here's the first of three videos sharing techniques for dealing with longer samples, this time looking at the cut and legato control patterns, and the difference between them. Here's a couple of examples to play with. Note what happens to the bev sample when you hush and there's nothing to cut it:

Continuing on from Week 3 lesson 3, let's round off our week of work with longer samples, to look at a different way of 'beat slicing', using chop and striate. Here is the worksheet:

Ok, lets have a look at some continuous functions! This is quite a large topic (hence the longer video, partly also because I got sidetracked playing with binary patterns) but will help for getting stuck into randomness later in the week. This video is basically all about waveforms (apart from that binary sidetrack).

Continuing from our look at waveforms including random ones, here's the first of a two-parter looking at a wide range of random functions.. Starting with a bit of armchair philosophising about the nature of randomness in algorithmic music.

I made these videos before the worksheet. I've decided that I should really do this the other way around, for a more organised video, so might reshoot it at some point. As ever, let me know what you think! I think I go through things a bit too fast, and at this point am starting to freely mix in techniques we've looked at in earlier lessons which you might have already forgotten about, so please (virtually) stick your hand up if you'd like me to go through anything again, from this or in any other lesson. You'd be doing everyone a service!